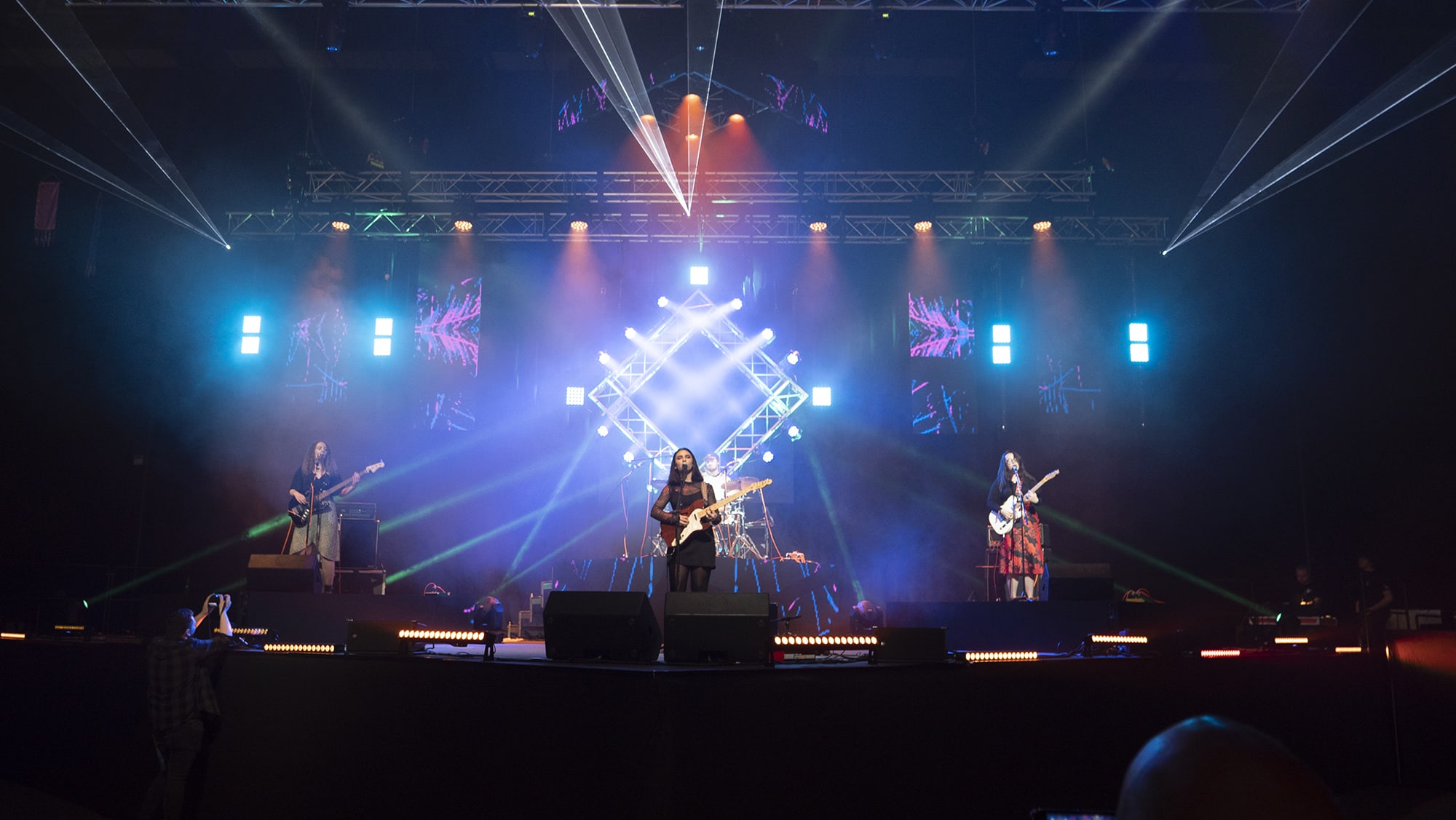 At time it felt like looking at technology futures through a prism.

At time it felt like looking at technology futures through a prism.

Our Graduate Showcase (Class of 2019) took place on Thursday 16th May and showcased the final major projects of our 3rd year students. Working under a dedicated project manager, students wrestled with five distinct concepts — designed to challenge the audience in some instances, and invite them into the conversation in others.

Travelling around the production facility’s vast studio complex they were able to connect with advanced motion tracking control, full sensory immersion in a simulated VR ‘CAVE’ type environment but with headsets rather than active stereoscopic 3D specs. Elsewhere, in Studio 001, Production Park’s arena sized rehearsal facility, there was a new take on a typical festival stage, while in our central studios, moving sound objects in space via d&b audiotechnik’s Soundscape was the order of the day, putting the audience at the centre and removing sound far from its traditional L/R stereo paradigm.

Another striking feature was the 30-minute one-man silent show—fully motion tracked. This was described by technical director, co-creator and lecturer, Shannon Harvey, as “the biggest collision and mash up of creative ideas I have ever been involved with. I said I would bring every toy I could to this party!” The project was the more remarkable since it involved a collaboration across the ocean with students from the University of Iowa.

In altering sensory perceptions some of the confident way in which this technology was deployed, willingly supported the brains behind them. It was suitably synaptic and visceral, but more importantly, rather than just an explosion of weird science, it made an emotional connection between technology and audience.

“It’s the first time we’ve presented the work in this fashion. The team looked back at last year and decided they wanted more scope to visualise. Our Live Visual Design & Production course has always been project based, so we adapted that to the other courses—which seemed the most natural thing in the world to do.

“It was the perfect time to do it with PLASA Focus taking place in Leeds, and bringing our industry partners into the area.”

Everything had come out of the imagination of students, she said. “They are exploring the cutting edge of new technology and what can be done, but at the same time it’s also a validation of the confidence placed in the students by the lecturers. We could not have done it without the support, passion and enthusiasm of our industry partners—it is that enthusiasm that has enabled [the students] to realise their ambitions by working with other professional teams. The Graduate Showcase is just one day but it represents three years’ hard work.”

This was an academic assessment of work on various BA (Hons) courses, or a digital dissertation as someone put it. And while it resides in the academic world our Production Park location makes Backstage Academy as close to real world experience as they will get, as students set out to transform a series of black box studios into coruscating jewels.

So let’s take a project fly-through.

This ran continuously through the day under the stewardship of Jessica Miree, a third year Live Events Production student, supported by sound technicians, Terrell Robotham and Scott James. This vibrant, 3D six-minute show used Holo-Gauze projection and a fully immersive lighting system, highlighted—according to Miree—by the new GLP impression E350 LED moving head. Every individual stepping inside what for all the world represented a VR CAVE, set out to explore the human emotions with scientific research, with the gauze rear-projected onto via Epson EB700U ultra short throw projectors. “The project aims to provoke areas of the brain that emotionally respond to visual stimuli. As visitors donned headsets they became immersed in underwater and new age sounds as well as some challenging monochromatic visuals at the end (think early David Lynch, Eraserhead period).

The lighting was triggered from the Green Hippo Amba+ Hippotizer Media Server via an Avolites Quartz while the show itself was triggered by QLab multimedia playback cue-based software. Other lighting was supplied by A.C. Entertainment, Chauvet, Ethix Management and Prolights with truss from Sixty82.

Next door to The Mood Cube two different shows were taking place back to back, with 360° alternating with Reverse In The Round, which featured excellent live band, Artio.

Reverse In The Round itself was truly unique. The idea was to take a typical gig and turn it into an immersive show with video wall, lighting and 360° sound. Each member of Artio, a local rock band, performed from a different corner of a rectangular venue; the audience could choose which member to watch, while surrounded with immersive video content. The 360° project, PM’d by Luke Deakin and Scott James, set out to create an environment where the audience felt completely surrounded by performance, their attention drawn to everything surrounding them in the different spaces.

This was achieved using Soundscape from d&b audiotechnik which allows for simple integration with Logic, the students’ DAW of choice. Thanks to the delicate touch of live sound engineers, this was accomplished.

d&b’s Simon Johnston explained that Backstage students had previously visited d&b’s UK HQ in Nailsworth and underwent a Soundscape training session. “They came up with this idea, designed it and ran it past one of our guys. He was impressed and made sure it would work.”

With the sound flying around the space, the task facing the sound guys was ensuring members of the band could hear each other.

Five up-and-coming local bands played this unusual festival stage during the showcase, and we caught up with Welsh indie blues band, Pretty Visitors’ set. Emily Popham, in her third year studying Stage and Production Management BA (Hons), was Project Manager, explaining that the stage needed to evolve around a festival venue. “It’s a diamond instead of a rectangular stage,” she said, explaining the title.

Popham said the project was about getting used to working with other students for the first time and interfacing with bands to meet their requirements. Looking to get into production management, she said,“I enjoy this kind of pressure and overall I’m very happy with the result.”

The main PA system, rigged by Nitelites, featuredRCF line array hangs, comprising 12 x HDL30-A, flown with four SUB8006-AS subwoofers, with further SUB9007-AS LF extension on the ground, all networked through RCF Control 8 utilising RCF’s proprietary RDNet control and management software. RCF’s Mick Butler led a day’s training for the students on the rigging and networking as a forerunner to the Graduate Showcase. ROE Visual supplied both indoor and outdoor video wall and the show was mixed through a Midas Pro 2 FOH and Midas M32 on monitors, with backline and monitors from STS Touring. A full range of proprietary lighting from A.C. Entertainment, Chauvet, Ethix Management, GLP, PRG and Prolights was controlled from Avolites Sapphire and Quartz desks whilst Kinesys and KRS Rigging supplied the automation and hoists respectively. Effects came in the form of lasers from AC Lasers and pyro from Quantum Special Effects. Comms were supplied by Channel 16.

A cross-university project between Backstage Academy and The University of Iowa, Media Clown integrates the newest digital media technologies with century old analogue clown routines. This was another expansive and challenging project which will also feature at the Prague Quadrennial 2019 as part of the PQ Studio: Festival representing the first phase in a long term research project.

The show revolves around the silent escapades of a professional clown, Paul Kalina, who, through repeated complications with the technology and an unruly music stand, finds himself thrust into a digital landscape unable to escape from a digital version of himself. There is virtual silence until the point, halfway through, when Dawn Upshaw’s soprano soars out of Gorecki’s sorrowful Symphony No.3 for a brief period and then … CUT! Magical.

Kalina’s movement was captured by Blacktrax motion capture, supplied by Lucid Technologies, and a perception neuron pro motion capture suit from Noitom. The data was streamed to Notch where the content was generated in real time. This was then sequenced by a Disguise media server and projected onto a rear projection screen and front hologauze that enveloped Kalina in a digital landscape.

“Coming from a cue-to-cue world to a system that is totally reactive to everyone is mind blowing,” exclaimed Shannon Harvey, who co-created the project alongside Daniel Fine and Paul Kalina from the University of Iowa.

The project was a challenge for production manager Kate Barker, a Live Visual Design & Production third year student from Backstage Academy. “We wanted to create the illusion of being stuck in a computer screen,” she explained. “It’s a one man silent show and we have used all the technology we can to create it.” The biggest difficulty the team faced was collaborating across the 6-hour time zone difference between Wakefield and Iowa.

Every member of the team had a role to play. For instance, Chelsea June from The University of Iowa fulfilled the position of Costume Designer and had to incorporate Blacktrax motion capture beacons, Noitom motion capture neurons, wireless DMX and LED lighting into the costume design.

Lighting came from AS Visual Solutions and CEG and projection from Creative Technologies. The sound system came from KV2 Audio and scenic elements were supplied by fellow Production Park residents, Brilliant Stages.

Overall, everyone was impressed. One of the most telling comments came from Midas’ Joel Perry. “It’s obvious [Backstage Academy] has the industry backing, with all tech companies working together. You want to get a better experience as a student and this is a real life experience… it’s like a working farm, and as good as any venue. It’s very high standard kit, and if we can help students veering towards sound in six or seven years hopefully they will already have familiarity with the kit, having started at the top end.”

The future is clearly safe in these young hands. As Rachel Nicholson so accurately put it, “The high the students will get from this day they will remember forever.”